Vietnam ended year 2015 with GDP growth rate of 6.68%, surpassing the consensus level of 6.2% which was set at the beginning of the year. Continuing the trend of recent years, the structure of Vietnam’s GDP is shifting towards industrials, construction and services while the contributions from agriculture, forestry and fishery are getting smaller. Since 2012, Vietnam has experienced trade surplus for the first time since 2007 with impressive average annual export growth of 22% versus average annual import growth of 16% in the period 2010-2014. Vietnam is expected to continue with this growth model in the foreseeable future thanks to the country’s expanding connectivity to the world as demonstrated by the increasing amount of foreign investments and recent free trade agreements. Notably, the official formation of ASEAN Economic Community on January 1st, 2016 will likely help improve Vietnam’s competitiveness in global and local markets, further attracting foreign investment. Total FDI in 2015, including both newly registered and increased capital, was US$22.76 billion (12.5% increase y-o-y), mostly benefiting manufacturing/production, utility production and distribution, and real estate segments which received 66.9%, 12.4% and 10.5% of FDI, respectively. 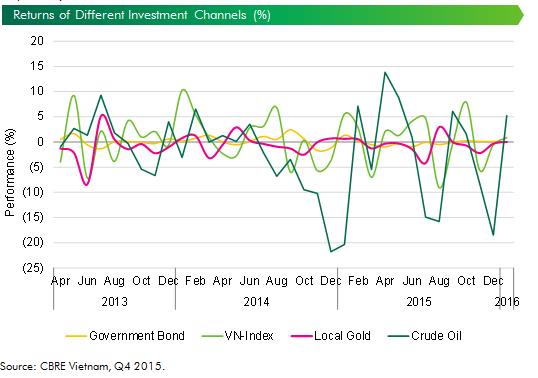 Vietnam’s real estate market is reaping benefits from the favorable macro conditions. Average CPI grew by 0.63% this year, which is the lowest level since 2001, and fell way below the annual average level of 5% recently. This low level of inflation rate supported the growth of consumption and investment level in 2015. Similarly, low mortgage rate supported activities in real estate market in the past year. Credit growth improved in 2015, recording 18%, significantly higher than the 12-14% average level of the 2012-2014 period, according to the State Bank of Vietnam. Although interest rate in Vietnam has slightly increased after the Fed’s hike its interest rate in late December, it is forecast that Vietnam will not expect a drastic change in interest rate in 2016, since most of the effect has already been factored in the interest rate‘s current value. This is good news for real estate investors as this real estate investment has been proved to yield better return than other types of investments such as currency, gold, oil, or government bonds, in recent years. Likely, it is expected that more fluctuations will happen in these markets in 2016. Last but not least, in December 2015, the State Bank of Vietnam announced a more market-based mechanism to assure that Dong currency be adjusted according to changes in macro-economics, demand-supply as well as eight influential foreign currencies in Vietnam.

Overall, 2015 has been positive for the residential market with uptick sentiment and lukewarm market performance. Although Q4 recorded a lower number of units launched compared to Q3, a total 28,300 apartment units were launched during the year, up 70% as compared to 2014.  Notably, in this year, high-end apartments marked a come-back with an increase in the share of both new launch supply and sales volume.  High-end apartments accounted for 28% in the total new launch units, compared to the 21% in the peak year of 2011 for new launches.  By location, the share of new launch units in the South (Hoang Mai District) and CBD-fringe (Hai Ba Trung District) increased, totalling 50%, which rate used to be minor as compared to the West and South West areas where more infrastructures are being developed.  New supply from the West and South West accounted for 46%, lower than in the past years when these areas used to account for over 50% of total new launch.

Demand wise, market sentiment was positive throughout the year and improved over the quarters. An estimated total 21,100 units have been sold across the segments over the year. High-end and luxury segments saw improvement in their shares of total sales over the quarters and ended the year at approximately 32% of total sales, which rate was historically below 20% in the past years.  Developers were confident and rushed to release either old projects at a new positioning or new projects that have been put on hold during the market crisis.

While the shares for mid-end and affordable segments have been lower than that of 2014, these segments still account for a majority in total sales, due to their affordability and targeting more end-user buyers.

Average pricing on both primary and secondary fronts has improved over the quarters of the year, at a moderate pace.  Overall, launch prices at new projects have seen increases of 3%-5% y-o-y. Certain high-end projects have recorded increases of 5%-7% in the recent launches as compared to previous launches a few months ago.  On the secondary front, overall market recorded an average increase in prices of 0.3% q-o-q and 1.1% y-o-y, in USD terms.  Resale price throughout the year has been quite stable and did not see abrupt change as supply rises.

With the revised Law on Housing and Law on Real Estate Business coming into effect from 1 July 2015, market has recorded certain level of interest from foreigners into major high-profile projects by reputable developers in both Hanoi and Ho Chi Minh City.  As the market is developing towards a more open and internationalized environment, while overall pricing is still attractive as compared to other matured markets, it is expected that more foreign buyers will look into Vietnam market as more guiding laws are issued to foster investment activity.  Both homebuyers and developers need to prepare for a changing market with evolving laws and regulations: Compliance and transparency are important in managing these changes. 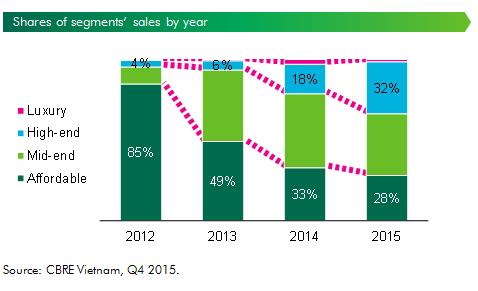 Average secondary price in USD terms was recorded up 1.4% q-o-q but down 3.6% y-o-y which was primarily due to effect of Dong devaluation. On y-o-y basis, Hoai Duc, Hoang Mai, Long Bien, Gia Lam, Thanh Xuan and Me Linh witnessed declines in resale prices while Cau Giay, Ha Dong, Tay Ho, Thanh Tri and Tu Liem District experienced growth rates from 7% to 10%. The largest price increase was recorded in Ha Dong District, where Park City and Gold Silk are located.

No new supply was recorded in 2015, which helped stabilize market rents in recent quarters. By end of Q4 2015, average asking rent of Grade A increased by 1.1% q-o-q, while that of Grade B went down by 0.7% q-o-q. The slight increase in Grade A offices mainly resulted from two projects offering higher rents due to improved occupancy. By location, CBD and Midtown saw improved asking rents (up 0.4% and 1.5% respectively) while the West saw slight decrease of 1.0%. This movement is ahead of upcoming new launches expected in next few quarters.

In terms of occupancy, both Grade A and Grade B buildings recorded improvements in occupancy. While Grade A’s occupancy rate increased by 5.5ppt q-o-q, reaching 87.8%, Grade B’s went up by 1.2ppts q-o-q to 89.1%. The greatest improvement in leasing performance was seen in Midtown, with 7.98ppts improvement. The CBD and the West clusters also witnessed positive occupancy, increasing 3.5ppt and 4.5ppt respectively. Grade A office space recorded a net take-up of 29,345 sqm while there was 28,240 sqm of Grade B space taken up. A number of new tenants are foreign enterprises who account for a larger share of CBRE’s enquiries during the quarter. CBRE’s enquiries also indicated that there has been high demand of leasing office spaces from companies who operate in Technology/ Electronic/ IT, Manufacturing and Banking/ Finance/ Insurance. These three industries are also taking the lead in terms of largest office spaces during 2015.

Moving forward, in 2016, Hanoi is expected to welcome sixteen office building projects with approximately 500,000 sqm of Gross Floor Area. Notably, TNR Tower – a Grade A building on Nguyen Chi Thanh Street will enter the Midtown office cluster. Another Grade A office and Grade B+ office will be in the West, significantly increasing supply in this area. In addition, there are signs that construction of office buildings might start at some of the prime locations in the CBD, which would lead to exciting developments for Hanoi office market in the next few years.

Average vacancy of Hanoi’s retail centers decreased from 15.2% in Q3 2015 to 10.7% in Q4 2015, thanks to high occupancy at recently opened projects, while the rest maintained stable performance.

In terms of rents, the CBD saw no significant changes in rentals while the non-CBD witnessed a slight increase of 3.7% q-o-q as Vincom Nguyen Chi Thanh offers rentals that are higher than market average for non-CBD locations.

Apart from the aggressive expansion plans for foreign and local retailers in Vietnam in 2015, one of the most noticeable trends is ‘affordability’. The emergence of new ‘bazaars’ ‘outlets’, and low price supermarkets are all reinforcing the trend that consumers demand better value for money.

Food and Beverage outlets recorded strongest growth during 2015 and will continue to dominate the market in 2016. CBRE Vietnam recorded that nearly 50% of its enquiries for retail space belonged in this sector and that the enquiries were more for fast casual dining than high end dining.

Looking forward, in 2016, new shopping centers are becoming affordable, targeting middle class, therefore rentals might not be as high as those in the past. Vingroup will continue to lead market share of retail space with several upcoming projects, yet all outside of the CBD. In near future, other projects developed by foreign players, including Gamuda, Ciputra may offer rentals at market average levels or lower also due to non-prime locations.

Local retail developers are more and more aware of the importance of anchor tenants, and therefore started looking for foreign anchor retailers to fill up retail spaces. However, large leasing area combined with strong negotiation power tend to help anchor tenant to secure incentive rental that is much softer than those offered for other tenants. Turnover sharing scheme, by which landlord can share part of operation risk with tenants, has been attractive to many retailers, particularly those who want to open additional stores in a new shopping center.

2015 has been relatively stable for Hanoi serviced apartment market.  No new properties came online during the year and total supply remained at 3,239 units.  Stable rental movements and relatively high occupancy of large and professionally managed projects were recorded over the quarters.  Due to limited land bank and high land prices in CBD, serviced apartment market has been expanding to other parts of Hanoi, either on the fringe of the existing CBD or in the new CBD area in the West of Hanoi. Three new projects with a total of approximately 500 units in these locations are expected to enter the market in the next two years.

In terms of market performance, both rent and occupancy rate slightly declined in the last quarter and the market ends the year at 86.4% occupancy rate overall and US$31.8 psm per month average rent for both grade A and grade B.  It is noted that the serviced apartment market has been under pressure of competition from apartment rental market which has been growing with more high-end apartments being sold throughout the year.